The journey continues (Return to the Sea part 2)

As I write this we are sitting in one of our favorite go-to spots in the Loreto area, the Tripui Hotel and restaurant. Today we will spend the day relaxing by the pool and enjoying the wonderful amenities of this tranquil place. It is just down the road from the Puerto Escondido Marina where we are tied to a mooring ball for the next several days while we load up on food, water, and fuel as well as take care of some business that requires connectivity.

I have been piecing together the details of the last part of our trip here from La Paz. The first part of the journey having already been shared. However, while going through photos and videos I came across a few that did not make it in my last post. So, I will begin by rewinding a bit.

Earlier this month we visited one anchorage each on Islas Espiritu, Partida, and San Francisco. We spent a wonderful week in San Evaristo where we visited with friends, explored and topped off our water tanks..

We had a fabulous few days at Bahia Los Gatos, which has given us some of our most spectacular experiences.

On the morning of May 15 we received a weather forecast with expected high winds from the North so we decided to move on. This time to an unknown to us anchorage called Bahia Santa Marte. Wow what a place. It proved to not only be a great spot to tuck in out of the wind, but more than that, it delighted us with constant sea life entertainment. The bay is located next to a large, very large, rocky reef and reefs mean fish, lots of fish. Lots of fish means a good food supply. From the moment we arrived sea turtles were poking up their curious noses, seabirds filled the sky, cliffs, and waters in every direction and the Mobula rays were leaping throughout the bay.

So many rays in fact that I mistook a swarm of them for a rock. Once the hook was set I became concerned about a dark spot in the water behind us. This could potentially be an uncharted rock that we could hit if the wind swung us in that direction. While explaining this to Steve I pointed out the dark spot by explaining that it was the dark area where the rays like to jump. As we watched we realized that the dark area was moving. It wasn’t a rock at all it was a mass of rays on the move and they were taking turns leaping as they went. We laughed not only at my mistake but at the silliness of the rays’ acrobatics.

Later in the afternoon a pod of dolphins came in and kind of paced back and forth along the shoreline. At first we thought they were feeding or resting, but they stayed and continued this activity into the second day. So on day two of our stay we went ashore to explore and get a better view of the dolphins. They were very aware of us and moved away when we walked toward them. I am now inclined to think that they were protecting a pregnant female or newborn. They were gone before sunset.

Several times during our stay we saw huge flocks of Eared Grebes, a duck-like seabird. These little guys are usually only seen in groups of 2-10, but these groups numbered in the 100’s. I can only imagine that a hatchery was nearby and that what we were seeing was an incredibly large flock of juveniles.

While sitting out the blow Steve worked on projects, performed boat maintenance and did some repairs on a few minor broken boat bits. I cleaned up the boat and did laundry, which is an all day event. All the while being constantly entertained by the leaping and splashing antics of some sea creature. Far too soon we had to leave because I over chlorinated our water tanks while we were topping off back in San Evaristo. So while we could use the water for showers and washing it was not drinkable. Therefore getting drinking water became a priority and there is a tienda in the village of Agua Verde which was right around the corner, literally. So after two nights we were off again.

Agua Verde! Another of the famous cruising stops in the Sea of Cortez and for good reason. It is a dreamy, postcard beautiful bay. There is a small fishing village surrounded by a beautiful ice blue water and white sandy beaches. There are free range cows that roam on the beach from the Rancho and goats on the beach and in the hills from the local goat dairy. The bay offers good fishing and when the water temps are warmer its a great snorkel spot. We have been here before but we never had the time to stay long enough to really explore. This time was different.

We celebrated my birthday by dining on a wonderful fish taco dinner with our toes in the sand, and having one of the savored bottles of Hitching Post wine we brought down with us in 2015 and have been carefully storing in the bilge. We made an attempt to snorkel, but the water was still too cold so we strolled the beach collecting shells. 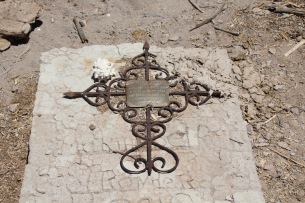 We took the time to hike to what we were told was a beautiful old cemetery. After a long steep trail over the hill what we found was an old cemetery, beautiful it was not. Unfortunately it was in great disrepair and the animals had been free to wander around inside the walls. However, we followed an arroyo and just around the bend we came upon a oasis that went out to ocean. It was delightful.

We ventured into to town a few times to visit the tienda and the only restaurant on the beach. On one occasion I was offered tortilla making lessons. Unfortunately I did not take the time to learn this needed skill. Next time we pass through I will be looking for Maricela. What a great interaction. Mi Español lessons are really paying off.

It was a tough decision, but time was moving along and we had some things that needed our attention. We had been off the grid for several weeks, the food supply was getting small, and for goodness sake we were almost out of rum! So on May 21stwe left the Agua Verde anchorage at about 7:30am. We had been listening to weather reports and we were expecting to pick up a nice southerly that we could sail all the way to Puerto Escondido. However, that is not what we got.

First we got a puff of wind from the South. Then we got some pretty steady winds from the East. No sooner had we hoisted all three sails and the winds fell flat. Bummed we pulled in the two foresails and left the main sail up for stability. I don’t think 10 minutes passed before we picked up a strong westerly wind. We had just rolled out the jib in a reefed configuration when we heard a loud bang and the boat shook. We assumed we had hit something, but could not see anything in the water. Still befuddled by the perceived hit we realized we needed to reef our main as the winds were increasing. It was then once on deck that we realized what had actually happened. The turnbuckle toggle on our port shroud had snapped. Leaving the port side shroud to flail. What we heard was the shockwave of the break reverberating through the hull of the boat. We quickly got all the sails lowered and turned the boat so that the wind would be against her starboard side relieving the port side pressure on her unsupported mast. We tied the failing shroud with rope as tight as we could and returned to Agua Verde. That short 45 minute trip was one of the longest voyages we have taken to date as we rolled through the swell.

Once back at anchor Steve, prepared as always, installed a spare turnbuckle in no time flat. We could have carried on with our journey at that point, but adrenalin had spent all of our energy and we simple sat in the cockpit and vegged for the rest of the day. We journeyed peacefully to Puerto Escondido the following day, May 23. And as I said we will spend a few days here getting stuff done. Soon we will be off again to explore more places new and old having more adventure and hopefully fewer trials. It is kind of a bummer that the end of this long lovely journey ended with such drama, but we will take bad with good. At this point we are still ahead.

As always we are grateful for this life. We do not take the responsibilities lightly and we cherish every precious moment as a gift.