Just around the next sunrise 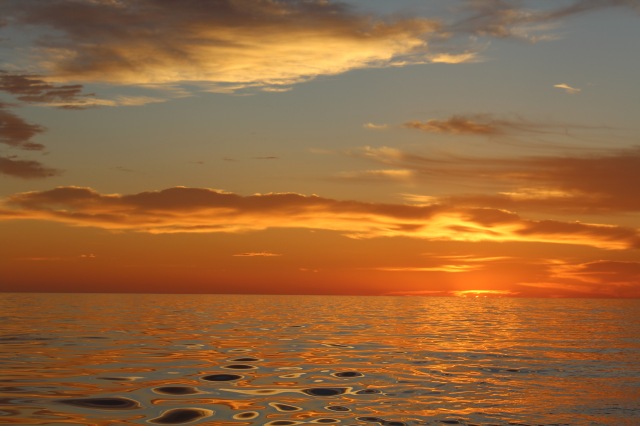 Cruising is a strange mixture of hurry up and wait, of discomfort and relaxation, of thrill and boredom. It is a life of extreme sensations where nothing is constant. If you are enjoying a moment you better soak it up, because it will be short lived. Thankfully, the same is true for the difficult times and this often gives us strength when the situation gets tough. We live the accelerated life of travel. Where everything is constantly changing.

After a slow and uneventful 36 hour passage up the coast from Chacala Bay, we arrived in Mazatlan in the early morning hours. Having already traversed this difficult harbor entrance once before we knew that we needed to wait for high tide to enter safely. Maneuvering his way past the shallow breakwater, Steve had no problems with the entrance. I on the other hand was having a heart attack, practically weeping as depths on the sounder read 2 feet under the keel. This while waves are breaking behind us, pushing us past the dredge in the narrow channel with the current flowing at about 3 knots. Man did that ever harsh my mellow!

Steve and I both like El Cid, despite the harbor entrance. But our visit to Mazatlan this time around was very short because the weather was demanding our attention for the upcoming crossing to La Paz. We could not complain however as we did manage to enjoy time hanging around the pool, beach, and local neighborhood. Additionally, we had the opportunity to share a fabulous day with Jim and Deb from s/v Brainwaves exploring downtown Mazatlan. 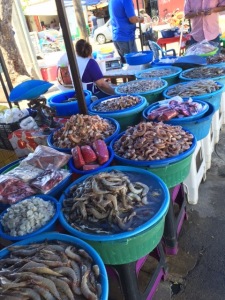 Our adventure began as we checked out the famous “Shrimp Ladies” which is a must do experience. We caught the local bus and told the driver where we wanted to get off. Once there we found our way to the corner with the multitude of blue tattered umbrellas. There before us was an entire block of women sitting before tubs of ice filled to top with fresh uncooked shrimp of various sizes and stages of preparation. We purchased two kilos and headed around the corner to Mariscos Dunia, a restaurant where they cook your shrimp for a ridiculously low price. We had our shrimp prepared two different ways and had two cervezas each and I think the whole bill came $300 pesos ($17 US). The shrimp diablo was some of the best shrimp I have ever had in my life! Oh how I wish I could bottle that sauce. 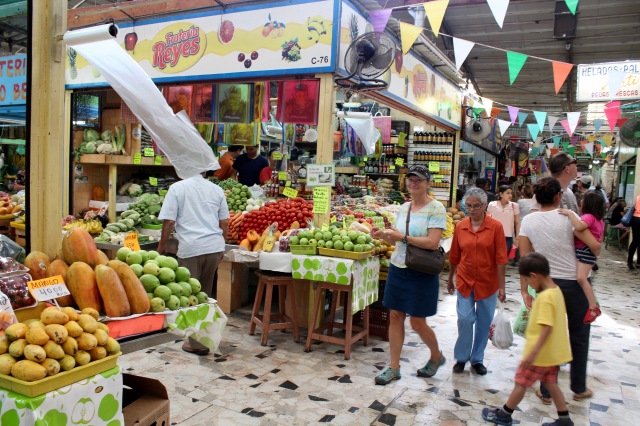 After filling up on shrimp we journeyed about 10 blocks through the streets of downtown to the Mercado Municipal. This colorful taste and sight sensation is hard to describe. Here you can find everything from meat, veggies, fruit, and candies to herbal medicines, purses, shoes, and jewelry. There are tasty treats like toasted coconut balls to make your mouth water and sights at the meat counters to make your stomach turn. After making some purchases of eggs, fruit, veggies, and candy the place began to overwhelm the senses and soon became to much to take in. So off we went wondering the streets of downtown further to the Plaza de Machado. Along the way finding great places to shop and a wonderful restauant called Topolo, which is now our favorite dining location in all of Mexico. Great food, beautiful ambience, delightful service. The day ended as the sun was setting with a noisy trip back to our marina in a Pulmonia through the crowded streets. It just so happens that this weekend was the annual rally which has 21,000 motorcycles descend on Mazatlan. So much fun and adventure! 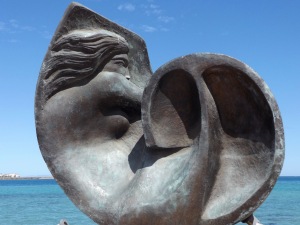 All too soon we found ourselves needing to leave El Cid and Mazatlan as we wanted to be in La Paz in time to meet up with a Women Who Sail (WWS) rally that is due to depart La Paz on April 17th. The weather was giving us a small window which meant leave now or we would be stuck for  at least a week. So we left El Cid at high tide early on the morning of April 3 and began our 56 hour journey to La Paz. The first day started out a little bumpy with medium swell on the stern quarter and winds on the nose, but soon the seas smoothed out and we sailed with light winds on the beam. Unfortunately, that was the only sailing we were able to achieve during this passage which was a major bummer. However, this also meant we were able to make the rhumb line and head straight to La Paz which was sweet! 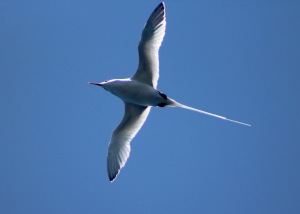 The light conditions gave us some of our most memorable passage making experiences to date. Our second night out delivered a moonless sky and the only light was that of our running lights and millions of stars. The water was so placid and clear that it acted as a mirror, reflecting the stars in the night sky. That coupled with the intensity of the green biolumenescence in the wake of our bow made it feel as if we were sailing through a dream. Floating through the starlight sky.

There was no discernible horizon and the pinpoints of light being cast across the sky and water made it difficult to tell what I was looking at. Is it a boat, a light house, a star low on horizon, a reflection? This phenomenon was beautiful and enchanting but became downright annoying when my navigation equipment gave me false AIS readings on a small 500 foot tanker that was coming my way. Once again the beauty is balanced with a bit of heart stopping excitement. 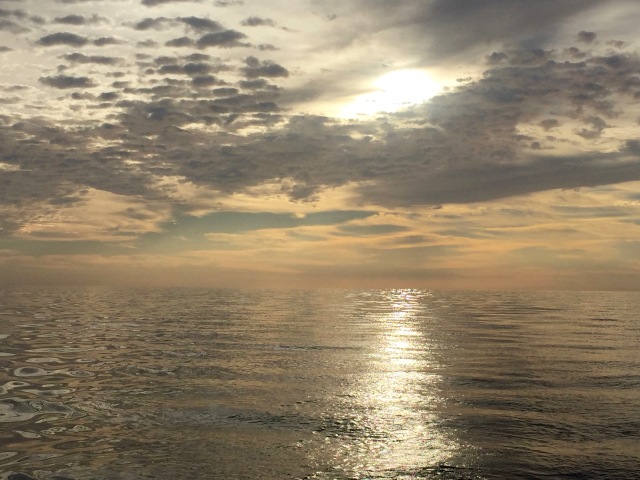 As morning came Steve witnessed a school of dolphins just as the horizon was beginning to lighten. Their black silhouettes barely discernible in the golden light. Followed shortly by a sunrise that is by far the most breathtaking I have yet to witness on our adventure. The sky and water at first being the color of steel, slowly changing to shades of pink, purple,yellow, orange, blue and green. I took a million photos and still was unable to capture the beauty.

Just outside of La Paz is Islas Espiritu Santo and we spent the night at one of the anchorages before heading into Marina Costa Baja. The still waters and calm conditions continued and we had an evening of entertainment as we watched Mobula rays leaping out of the waters around our boat and huge schools of tiny fish all jumping at once to make a sound like that of falling rain. In the morning we saw what at first looked like hair floating on the waters surface later discovering it was Sea Salps (see “the silly things we do“). The adventure has left us wanting more and we will soon be sailing around the islands in the Sea of Cortez. 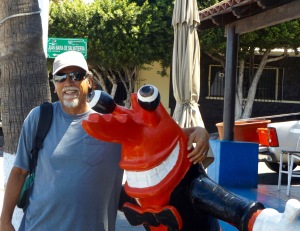 For now we wait to leave with the WWS rally. In the meantime we got some engine maintenance work done, have been exploring La Paz, hanging out at the infinity pool, and making new friends with another adventure just around the next sunrise. 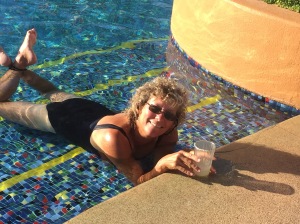 2 Responses to Just around the next sunrise

Life's too short to stay in your Slip!