We just returned from a two night stay in this beautiful little village, which sits on the south end of Banderas Bay surrounded by jungle covered mountains. The water is warm, the people are friendly, and the very air is infused with the rhythms of life. This is a place to explore and relax. You can hike to the top of a waterfall, laze about in a hammock, or sip margaritas while lounging by the shore. Or like us, do a little of everything. We could very easily have stayed here a week or more. Perhaps next season we will. 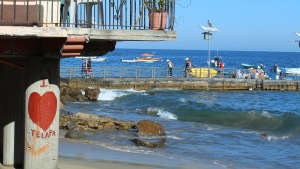 Our trip started on Friday morning 2/5/16 with a taxi cab ride to Boca de Tomatlan where we picked up a water taxi that delivered us to Yelapa. Unlike our last visit where we had to jump off the front of the boat while it bounced in the surf, we were able to depart the boat at the pier. For this I was grateful as I was carrying my camera in addition the hauling my backpack with my minimal belongings. Although I have to say that exiting the boat onto the dock in high swell is not much easier than jumping onto the beach. Instead of getting your feet wet you might loose your fingers when the boat smashes against the pier, but hey this is an adventure, right?! I’m happy to say that Steve and I still have ten digits on each of our hands and feet, proof that we did well. After getting onto land the next step was to find the location of our accommodations. This task is only slightly hindered by the fact that Google has no street map of the area as there are no streets. Luckily we found a sweet young boy who showed us the way. Truthfully, once we got familiar with the area we realized a blind man could find his way. There are not that many paths to wonder on,

but we did not know that when we arrived. So at the time, we were lost. The paths are paved with cobble stones and are just wide enough for an ATV, which is the primary method used for moving goods like water, ice, and groceries around the village. You often see products being moved by wheel barrow and donkey, but it obvious these methods are being replaced by the Motos (as they call them)

After traveling up and down a few steep hills we found the Yelapa Oasis, our home for the next couple of days. We were greeted by the proprietor Lisa who gave us a tour, served up some fabulous sandwiches and made us feel warm and welcomed. Our friend John, whom we know from Santa Cruz and is a part time resident of Yelapa was there as well and the two of them quickly gave us the lowdown on the area; where it was easiest to cross the river, the best time to visit the waterfalls, the best places to eat, and information on the live music event that would be featuring John on Saturday night. The magic of Yelapa was already working its way into our bones and we had only been there a few hours.

We chose to stay in the Oasis because of its rustic charm. The rooms, if you will, are actually called casitas. A building made of concrete with no ceiling or glass in the window openings. The roof is thatched palm frawns and the the windows are covered with bamboo shades that you can open and close for air and light. The bed is covered in mosquito netting, a fact we were much grateful for and the furnishings took minimal to an extreme. The property sits right on the river and is beautifully landscaped providing various areas with hammocks or small patio areas. Perfect for quiet conversations, personal introspection, and naps. It was earthy, romantic, and peaceful.

Once settled in we quickly changed into our bathing suits and headed off for the beach.

Our casita was located on the other side of the river from the beach and normally the river is shallow at this time of year and easy to wade across. However, we were just in time for the cane toad mating season so the river was blocked making it more difficult to pass. This meant taking a sweet walk through the jungle to get to a bridge further up the path making it easier to cross. This also provided a wonderful opportunity to take photos, view the

wildlife and explore. So, over the river and through the woods…. we finally make it to the beach! Where we spent the remainder of our afternoon. That evening we fell asleep to the wild sounds of the jungle. You can’t imagine how loud amorous toads can be, really!

Morning had us hiking up to the waterfall. We had hoped to get breakfast at a place at the end of the trail but they were not serving yet. So we went to Cafe Bahia which is right in

front of the pier, which gave us real insight into the importance of those water taxis. We watched tourists with suit cases leave from the pier, while more tourists arrive both for the day and for an extended visit. We watched as pangas showed up loaded with fruits, vegetables, water, and jugs of gasoline. We saw local families coming and going on what we assume is a variety of errands in Puerto Vallarta. As we watched a local fisherman casting his net to catch bait fish a boat arrived with what looked like someone’s home possessions.

After fighting the swell the driver tied up and off loaded the belongings onto the dock which were carried away by men with wheelbarrows up into the hills. Only one item was observed falling into the water, never to be seen again. Such an interesting way of life! 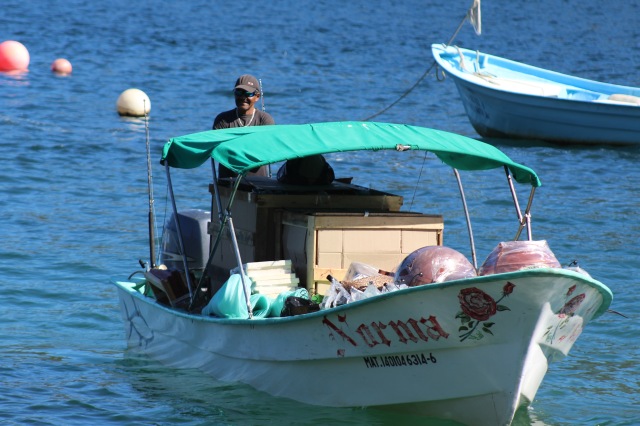 The rest of the day was spent lounging by the shore sipping passion fruit margaritas and soaking up the view. Time was well spent having a wonderful conversation with an old man who walked from Chacala, three hours away. The sweet man tolerated my low level of Spanish, helping me with words as I tried to express myself. We shared strawberries and grapes and the appreciation for all things simple. Afterward Steve and I wondered the town, handing out candy to every child we met and marveling in the simplicity of this life. Late afternoon was for hammocks and naps, conversations with other visitors like ourselves and a maddening attempt to get a picture of a woodpecker. Evening brought the great tastes of tapas from the kitchen at the Oasis and an evening of music with our friend John playing the conga drums. Sleep came easily even with sound of the toads filling the night air.

It was difficult to leave when morning came, but when its time you just have to go. We plan to return, but really even if we didn’t, this place has left its mark on us. A magical time spent in the jungle of Yelapa.

This entry was posted in Cities of mexico and tagged exploring Mexico, Mexican cities. Bookmark the permalink.